British actress Keira Knightley is a certified stunner, with her slender 5 foot 7 frame, brunette locks and bambi-like eyes, she has taken the Hollywood world by storm after appearing in movies Pride and Prejudice, Atonement, Bend It Like Beckham and Pirates of the Caribbean: The Curse of the Black Pearl. The 25 year old star, who bears a resemblance to fellow Tinseltown hottie Natalie Portman, is naturally slender, but argues that her slim and perfectly toned body is something that she works hard for with her healthy diet and exercise routine. 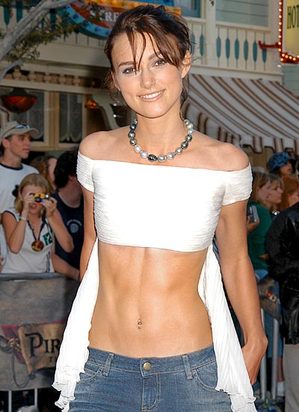 Keira Knightley’s diet involves both having a balanced diet and portion control. Her diet basically allows her to eat whatever she wants as long as the servings are kept in moderate amounts.

At the same time, Keira Knightley’s diet needs to be monitored closely to ensure that she picks healthy meals but luckily, she does follow a well-balanced meal.

For Keira Knightley’s exercise routine, she does strength training and did boxing, weightlifting, archery, and axe fighting in preparation for several characters she played in her movies.

“I’m not going to jog five miles every morning. I haven’t been to the gym since January, and I’m drinking about a half a bottle of wine at night,” she shares.

Keira Knightley’s exercise routine is done one hour and half for 3 days in a week. She does weight lifting and abs to strengthen her body in general, swims to burn extra fat, and does stretching for 15 minutes at the end of her routine to increase her body’s flexibility.

Keira also shares, “I really like the idea of yoga but I can’t do it. It just pisses me off. If anybody tells me to relax then I just tend to tense up. That’s why I’m not a yoga girl at all unfortunately. And gym work is just so boring and repetitive. I’m not a gym person at all. The most exercise I get when I’m not working is when I turn up the radio.”