It sounds.. weird, we know, but the Hay Diet would not require you to chomp on hay, rather, if you are a believer that the only way to lose weight and being healthy is a logical approach to choosing and eating foods, then this eating plan may be perfect for you.

Developed by highly respected New York physician William Howard Hay, and having been followed by indiviuals such as Princess Diana of Wales and Sir John MIlls, The Hay diet is based on putting the digestive system in it’s optimal functioning by separating out food groups according to their alkalinity and acidity.

Also known as the food combining diet, this eating plan revolves around the principle that acidic foods ahould never be eaten with alkaline foods, because a mixing of both would produce an incorrect combination that will increase the acidic environment inside the stomach, leading to an accumulation of wastes the body will have a hard time eliminating.

For Dr. Hay, a classification of the three types of food groups according to their chemical requirements is a much-needed tool for efficient digestion. These are the three types: 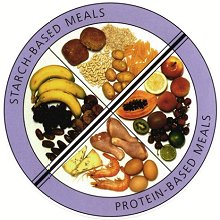 The general rule is to never eat anything from List A with List C, because this will excite too much hydrochloric acid during their stomach digestion. The practice is to eat three meals per day, spaced 4 hours apart, with one meal being strictly alkaline foods only, and two meals combining proteins with the vegetable list.

The Hay Diet is one of the earliest versions in a long list of food combning eating plans, and several books written about this topic all commend the Hay diet by expressing its merits and selling its recipes. All in all, it is a fairly reasonable diet beneficial to individuals with asthma and indigestion, and is also a natural stimulant for healthy weight loss.