Hitmaker and rocker chick Pink is the voice behind hit songs Get This Party Stated, Who Knew and U + UR Hand, getting millions of people hooked to her penchant for seamless rapping and catchy tunes. Not only does she posses a voice guaranteed to make a grown man cry,  she’s also got one lean and mean figure, thanks to her healthy eating andexercise routine.

"I diet absolutely. It’s gotta be organic, fresh fish, tofu and greens during the day." She says. "I have to be in shape because of the grueling touring schedule I have." 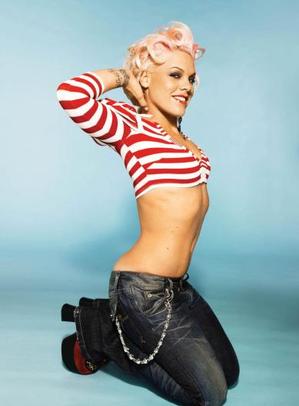 She eats 4 to 6 small meals per day that helps in speeding up her metabolism and keeping her body well energized especially during her concerts or performances.

She also uses portion control so she can still eat whatever she wants but learned how to monitor how much she eats. Most of the time, Pink’s diet includes her favourite foods and eats them in moderate amounts.

For Pink’s exercise routine, she does cardio exercises particularly running together with her personal trainer Gregory Joujon-Roche.

She starts her routine with a light jogging for the first 20 minutes of the first week. Then by week two, she began to increase the time to 30 minutes until she reached one hour. With that, she has increased slowly her endurance together with increased intensity which makes jogging a lot easier. At present, she jogs at least 3 to 4 times a week.

Another part of Pink’s exercise is yoga, which she began doing a few years ago. She does this for one hour per day that helped a lot in lengthening and stretching her muscles while working out her entire physique.

“There are different levels and styles of Yoga.  I tried a few classes before I found one I liked. I now LOVE Yoga after a hard week of strength training. Try a few moves to help your body relax as you hold each position and concentrate on breathing,” Pink says.