Since his breakout role in the cult classic Bill & Ted’s Excellent Adventure, Keanu Reeves has become one of Hollywood’s Most Eligible Bachelors. His start turns in hit flicks such as Speed, Point Break and the science fiction-action trilogy The Matrix only proved how he has become one of Tinseltown’s most profitable movie stars. This 6 foot 1 hunk also sports a ripped bod sure to make women drool all over, and here, he dishes on what keeps him young and healthy. 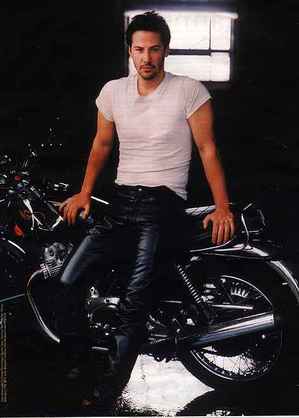 “I don’t take liberties with what I eat, but, generally, I like lots of chicken, pasta, rice and vegetables. I eat three good meals a day, but small portions. I also like the occasional beer and wine” Keanu says.

Keanu Reeves’ diet allows him to eat whatever he wants as long as he keeps the serving sizes at moderate amounts.

For Keanu Reeves’ exercise routine, he participates in sports particularly basketball and ice hockey. It helps him build-up his endurance and keeps him in good condition.

When he did his role in the film “Speed”, Keanu worked with an Olympic trainer, and while doing the movie "The Replacements”, he underwent a training from NFL quarterback Bo Gagliano. He also studied martial arts when he did "The Matrix" film trilogy wherein he worked with Kung Fu acclaimed choreographer Yuen Woo Ping that help tone up and strengthen his body.

Keanu Reeves’ exercise routine also includes weight lifting to help him build his arm muscles so he’d get a more defined "cut" appearance. He likewise developed his core strength through doing yoga and using exercise balls to help build up his abs, back, hips and pelvic muscles. To keep his legs strong, he did dead lifts, lunges and squats that helped in developing his thighs, hamstrings and quad muscles. Finally, to achieve all this, Keanu consistently adheres with his routine for several months.