Cooking sinfully good food for a living may make it hard for others to fit into a size 2, but not Giada De Laurentiis. The star of Food Network’s Everyday Italian and Behind the Bash has been glowing on the small screen as she makes cooking seem effortless all while looking stunning. At 40 years old, she looks more fit and beautiful than ever with her slim, slim waist and hourglass figure, even after giving birth.

"I credit this to good eating and exercise habits." She claims. "I was a gym rat before I got pregnant, then I did Yoga after pregnancy. Plus, I grew up in a family where no foods were forbidden and we actually sat down to savor our meals."

Giada De Laurentiis’ diet practices portion control. This gives her no food restrictions as long as she eats in moderation by watching out for serving size and total caloric content. 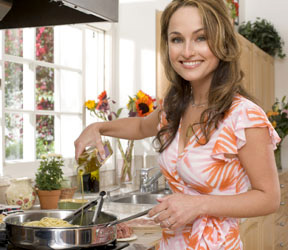 "Food is not the enemy! It’s not the food; it’s how much you eat. I eat pasta, but a small portion, not a giant one, and I eat more greens than carbs.” Giada says. "A Smaller serving is key."

Though Giada actually follows the portion controlled meals, she isn’t that conscious when it comes to the exact measurements.

“A good gauge is to think in terms of an appetizer-sized plate rather than dinner-sized. Then tell yourself that you’ll savor every bite,” she says.

With regards to Giada De Laurentiis’ exercise, she works out three to four times a week running on the treadmill and attending Yoga classes. She only started doing yoga after pregnancy, when she was looking for a slower-paced kind of physical activity.

"I thought, ‘Oh, this will be a good way to stretch,’ but it turned out to be so much more!" She says. "It taught me to breathe, it strengthened my muscles, and it helped me relax."