Elle Macpherson’s Diet and Exercise Routine Right from “The Body”

Australian Supermodel Elle Macpherson is known as The Body in the modeling industry. A well-earned nickname, considering her six foot frame curves in all the right places, with long, lean legs that seem to go on forever. Add to that her lustrous blonde hair, sparkling brown eyes and sexy Aussie accent and you get the complete package. At 47 years old, Elle still looks as refreshingly breathtaking as when she first started, thanks to her healthy eating and exercise habits. 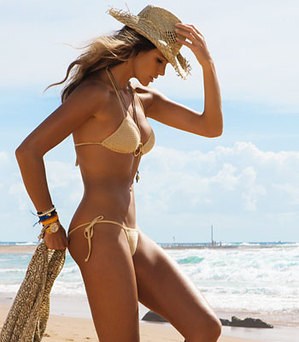 Elle eats two times a day, which means she eats a small breakfast of fruit, then grazes between lunch or dinner. To keep her blood sugar level at its normal range, she avoids consumption of processed carbohydrates like pasta in her diet. She drinks at least 8 glasses of pure clean water daily.

“I try to put aside an hour a day, five days a week, to do some sort of physical exercise, whether it’s Pilates or running in the park. But with two young children I don’t always get that time,” Elle claims. "But I really try, I think exercise is very important."