Gorgeous Canadian star Elisha Cuthbert earned fame on Fox Network’s frantic drama, 24, then parlayed into the big-screen with winsome portrayals in movies such as Old School and The Girl Next Door. This 5 feet 4 inch celebrity isn’t only oozing with sex appeal and sophisticated charm, she also owns one of the hottest figures in Tinseltown, which she credits as a result of her healthy living.

"I don’t really try to work out, but I try to do things that are active." She says. "You can’t catch me sitting at home watching TV all day, I like to jog and stuff like that. I don’t also follow a strict diet, I just eat in moderation." 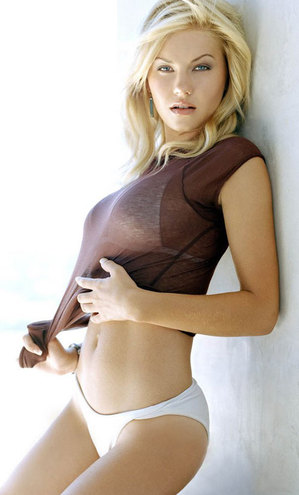 Elisha Cuthbert’s diet consists of well balanced, portion controlled meals. This eating plan allows her no food restrictions, as long as she controls her serving sizes and eats in moderation. This diet eliminates the feeling of deprivation commonly felt with other dieting plans.

“I’m a big chocolate fan. Lindor, the little balls – They’re so creamy and good. I don’t know how they stay melty like that, even if you put them in the fridge. I like all chocolate, though.” She says of her guilty pleasure.

"I’m not a gym girl.” She admits. "So I try to run outdoors, walk, ride a bike.. anything that keeps me active."

Cardio exercises such as jogging, walking, swimming, bicycling, hiking, and the like allows a temporary rise both in respiratory and heart rate. Elisha Cuthbert’s exercise routine enables her to burn 300 to 600 calories per workout, thereby increasing cardiovascular endurance, hastening the metabolic process, and burning a lot of calories.