Supermodel turned actress Amber Valletta is among the hottest and most sought-after models of the world. With her 5 foot 9 frame, the 37 year old stunner conquered the runway and appeared in various high-fashion international magazines with her drop-dead gorgeoussimo looks. Her beautiful face has graced the silver screen a couple of times for movies Drop Back Ten (2000), Man About Town (2006), Dead Silence (2007), Gamer (2009), and The Spy Next Door (2010). Here, the actress shares the diet and exercise routine that has kept her modelesque figure waif-like all these years. 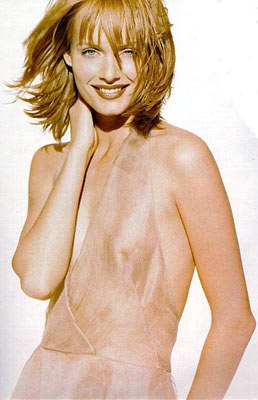 "My goal was to get my arms and legs stronger." She says. "And with proper diet and exercise, I’ve noticed I have those now. Lately I put on a skirt, and noticed how great my butt looks."

Amber Valletta’s diet is the vegetarian diet with a twist. It allows the intake of cheese and dairy products, and prohibits the consumption of meat.

Most of the time, the moral issue the dieter believes in pushes him or to her to follow such diet aside from the health benefits the diet can give to the person.

Some of the health benefits it can give are it can lower the cholesterol levels, burns a lot of calories, and prevents arterial clogs. Weight loss can still be achieved with Amber Valletta’s diet but she has to limit the intake of cheeses or other dairy products.

An example of Amber Valletta’s diet plan on a typical diet includes the following meals:

“I played as many sports as I could- soccer, track, and basketball,” she says. “In fact, I always dreamed of being an Olympic or pro athlete. I didn’t have that kind of talent, but I loved being physical.”

Instead of going to the gym to work out, Amber works out with her personal trainer Juni Armstrong, three to four times per week at a local university track to finish a 90-minute outdoor exercise routine. Amber Valletta’s exercise routine starts with warm-up through completing three to four laps around the track

After which, they circle the entire stadium, then run up every row of the steps, perform a set of either push-ups, bench presses, or lunges at the top, followed by running down the steps until they’ve reached each stairwell in the stadium. They finish Amber’s routine with 10 minutes of abs together with some weight training and cool down stretches.